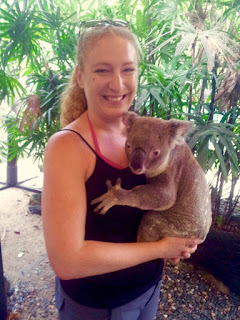 I thought when I got to Australia I could indulge in a little brain vacation because we all speak English. Turns out, none of us do! I speak US-ian and they speak Australian, and none of us actually speak England-ian. It's usually easy to translate -- if we just stop pronouncing our R's and start pronouncing our T's, we've pretty much got it. But sometimes it's not that easy. In the interest of keeping the memory alive, I took to writing down what I learned. Maybe it can do some fellow US-ians some good...


Gum tree.
Actually eucalyptus. Why it goes by "gum" is anyone's guess. Maybe the way koalas look when they chew the leaves? I just made that up, don't listen to me.


Cuppa.
I believe the literal translation is "cup of," but as with "as," the preposition is useless. I'm pretty sure it refers to tea and coffee both, although in my case it's always meant coffee.

Rock up.
Like "show up," but obviously way cooler.

Macca's.
I'd say it's slang for "McDonald's," except it's more than just slang. You'll actually see it on signs and stuff.

Bush.
The (not-dirty) word for nature. Lots of trees and/or shrubs and/or brush. "Bush walk" is apparently their term for "hike," if that helps.

Ranga.
Someone with several of my same physical features remarked that we were both "rangas." (I thought she said "ringers," which has since led to even more confusion.) Pregnant pause as I tried to figure out the most likely thing this meant. I opted for curly hair, and I was in the right ballpark anyway: turns out ranga is their word for ginger. I still think curly hair makes more sense. 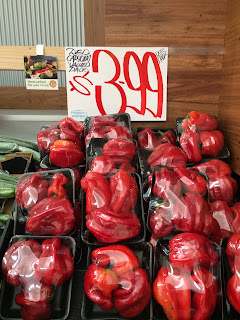 Capsicum.
Even though they're with us on zucchini and eggplant, they threw us a curveball with this, their term for bell pepper.

Rocket.
What they call arugula. Actually probably the accurate term for it??

Too easy.
Presumably meant as a friendly equivalent to "no problem," it always comes off to me more as an eye roll. Like, "come on, mate, give me a real challenge!"

Bench.
Counter. Which is confusing mostly because they are both in the same genre.

Eftpos.
OMG! This one! I guess it means any card you'd pay with - credit, debit, etc. But the cashiers really use this word instead of "credit card," or even "card." Such that I'll ask if they accept cards, and they'll look at me like they have no idea what I'm talking about. It's the same way they look at me when I try to pronounce "eftpos," actually, which is predictably problematic.

Taking the piss.
Um, I don't know. Whenever someone says it, I just pretend I know what they're talking about.

Tea.
Tricky only because you think you do know what it means. It actually means the main evening meal, at least when some people say it.

Keen.
I always thought this meant interested in something, e.g. keen to see the Great Barrier Reef, or even maybe keen on a fella. But apparently it can also be an adjective all by itself. You can just be keen, period. Like it's a character trait. I think it's a good one, but that's about as far as I got.

How ya going.
Pretty easy from context clues, but way more common here than our versions like "how's it going" or "how you doing." 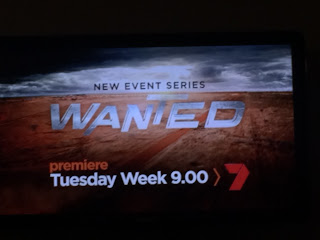 Pint/Jug/Schooner/Stubby/Middy.
When you ask for a beer and they ask you what size, it helps to know what the heck they're talking about. Unless you want to just go for the jug all at once -- who am I to stop you??